Stuff to Know about Cheryl Blackford 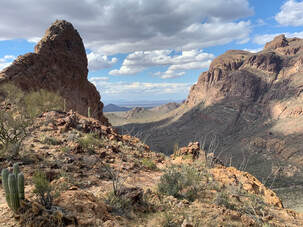 ​I was born in England but now I live in the US, spending the summers in Minnesota and the winters in Arizona. When I have the opportunity, I love to travel and hike in new places. The photo above was taken in New Zealand, on a hike to see the Rob Roy glacier. New Zealand is one of the loveliest countries I've visited, and I've been to quite a few (see below).

​The photo on the left was taken on a hike in Organ Pipe Cactus National Monument in Arizona, near the border with Mexico. I like to spend time outdoors and often find inspiration for settings in my books from places I either love or find really interesting.

What else would you like to know about me?
​Q: Where did you grow up?
​I grew up in Hull, a city in Yorkshire, England. I lived there with my parents, sister and brother and a succession of pets including cats, hamsters, and gerbils.

Q: Why did you move to America? And was it difficult to move to another country?
I came because my husband was offered a job in Minnesota. And yes, it was hard at first. We had two small children and we arrived in Minnesota in January. Minnesota winters are COLD! Much colder than English winters. That was a shock. I had never seen lakes covered in ice so thick you could drive a car over them. But the summer was a challenge too because there were tornadoes and mosquitoes the size of bald eagles. (That's not quite true. But boy, those mosquitoes were everywhere.) I was lonely - I missed my family and friends. In this whole huge country the only people I knew were my husband and children. But we soopn settled in and we liked our new life so much we became American citizens.

Q: Did you like reading books when you were a child?
Reading was my favorite thing to do. At night when I was supposed to be sleeping I'd use a flashlight and read under my bed covers. Our local library was small and by the time I was nine i'd read all the children's books. The librarian would only let me borrow books forolder readers if I could prove to her I could read them she picked one off the shelf at random. I read it. And from then on I could borrow any book I wanted.

Q: Did you always want to be a children's writer?
I always loved writing but I never thought I could be an actual author. I studied geology at university, then I became an elementary school teacher and when we moved to Minnesota I wrote technical manuals and information on web sites. I even helped design some early computer games. But none of that made me really, really happy so I decided to see if I could write a children's book. I wrote one, and then another and many, many more. Five of my books have been published and another is on the way.